Her Career Ladder
Episode 4: Characteristics of An Ally
April 8, 2021 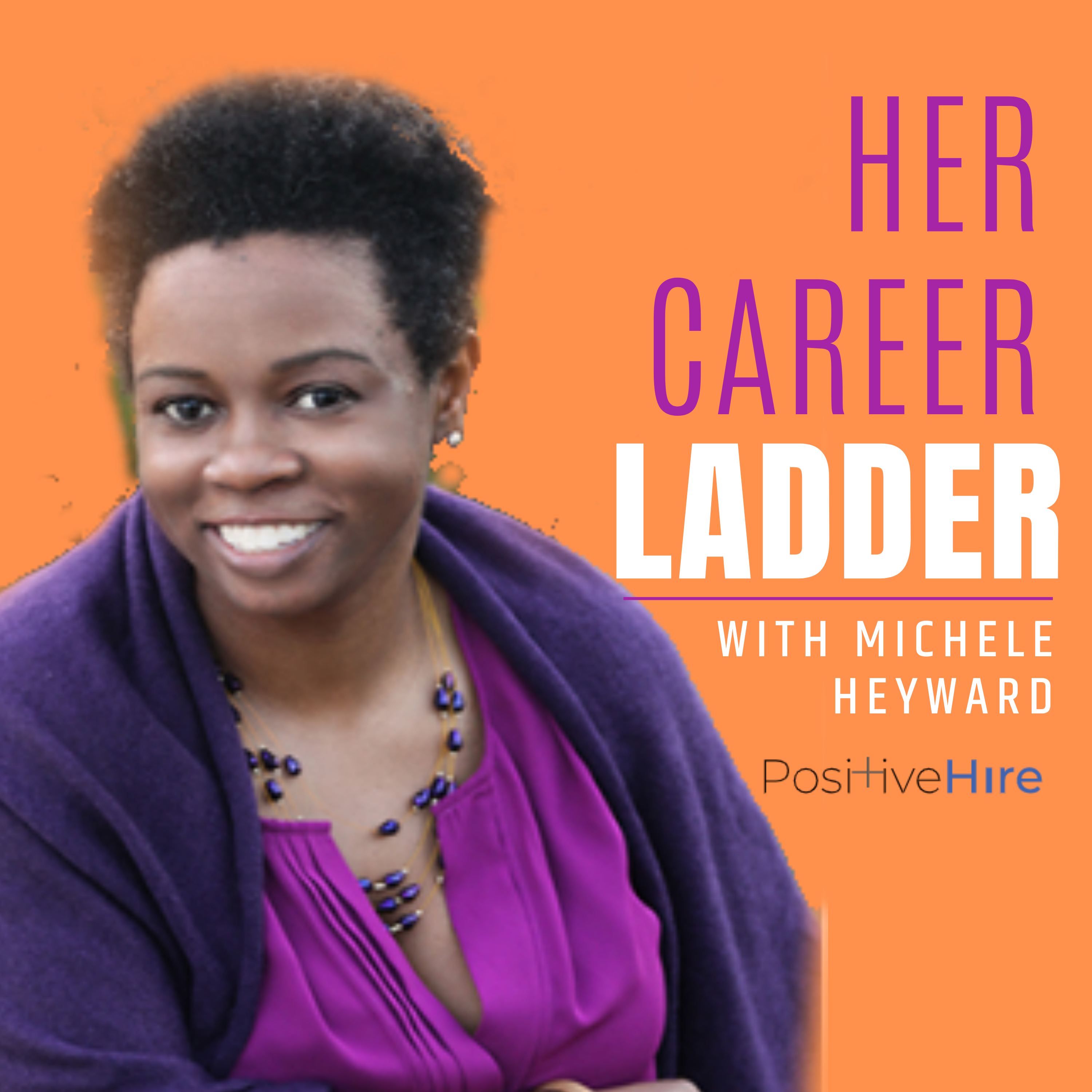 #MentorMonday Characteristics of An Ally
Hello, hello. Hello, everybody. It is mentor Monday. This is Michele Heyward. Thank you all so much for joining me today. I want to get into talking about allies in the workplace, yes, allies in the workplace that they should look for when it comes to characteristics. For an ally in your workplace. Let me move this mic just a little bit closer. So when it comes to allies in the workplace, these people may not have a lot of authority and power, but they still are there for you. So first of all, I want to go through some characteristics of an ally. Or I want to start out with one characteristic you don't want an ally to have, right first of all, if you have an ally or somebody who is always gossipy, who did you hear? I heard look at that over there. Those are generally not the people you want as an ally. Those are the people you want to stay away from. Yes. Because what happens is they will bring more drama.

They can hurt your credibility your brand in the workplace. Okay, so you don't want anyone who's gossiping, but you do want someone who is knowledgeable in your workspace. Yes, someone who is knowledgeable, meaning they have access number one to information. So this person has access to information to other people in the organization and sometimes the industry. So when you're looking for an ally, like I said, they shouldn't be gossiping, but they have access to information that could really help you maneuver through that organization where there's your particular location, your department, maybe even The division or the corporation on a hole in that information could be new opportunities. Hey, Shelly, could be new job opportunities, new promotions, new offices that are opening up, right? Because sometimes opportunity comes in a form we did not take up opportunity will show up in a way we had not thought of. So we always like, Oh, I want this job title, the salary, this location. And sometimes it comes through via what looks like work is not dressed up real sexy. It's dressed up real dirty. It looks like confusion and mayhem, right? But it's an opportunity you may have to take or you may want to take in order to get where you want to be and that Allah has to information before the rest of the organization happens, they may get access to this information before the decision maker gets access to it. Yes, that does happen. Oftentimes admins talk and they share information before the bosses now because they support one another and making sure they're okay within organization. Now what what is next when it comes to allies? They are supportive of you. Meaning they aren't looking at backstab you they are happy when you when they are going, Oh, I see you got invited to that meeting. Huh? They're like, yes, you got invited to the meeting. Who did you sit next to? Did you meet such as? Oh, did you tell them that you know this? They are in there? Like how did it go? Well, did you do this and sometimes they are prepping you for meetings like okay, when you get there, try to Sit next to this guy pull up his profile, I pulled up his profile on LinkedIn, this is what he looked like, I screenshot the picture and send it to you try to sit next to him because he's the VP of whatever. Okay? He went to college here like they will do reconnaissance and research for you. Yes, like they support you like no other. What do you know, such as such what they're going to be here for a meeting, you should come to lunch like, they are doing things to support you getting to where you want to be. Now, remember how I mentioned that they may not have power, but they may have influence. So they may have access to the key decision makers. They may have access to people who are deciding where people within the organization get promoted to and get opportunity, but they don't make that ally doesn't make the decisions.

So imagine this. Imagine this you No, you want to go to DevOps, but right now you and it. And the only way for you to go into dev ops is if you decide to tell somebody so you tell your manager and your manage like now, you should stay where you are in network. But your manager knows and you discussed several times that you want to go into DevOps. So you tell your ally, you're like, boo, I got you though. I got you. I heard about an opportunity coming up is such a such department. I know. The guy that runs that department. I'm gonna go talk to him. That ally goes to talk to ya heard Have y'all looked at Keisha? She really, um, she's over networking, but she's only been there like three for six months. But she did DevOps for four years. Really? Yeah. You should pull up our profile right here. I'll email it to you. Right here. Let's go ahead. Yeah, pull that up. See, she would be perfect for that role. You should check her out. Thanks. I didn't know about Kesha. Well, they may not get the decision maker to bring you over to that role. Guess what the decision maker didn't even know you existed? Right, because your manager not talking about you as a manager wants you to stay where you are, and not go where you want to go. But that allies about you getting to where you want to be, and that's truly truly important. So they can bring in that influence. Now you're like, Look, Michelle, how does my ally know where I want to go? Because they listen to you. You have built a relationship of rapport and your ally, you trust your ally. So your ally listens to what you say intently. will ask you questions will help you sometimes create Action Plan. This is how you know you have an ally. And sometimes you don't realize you have an ally because you don't know what an ally is. Sometimes you don't realize you have an ally because you think in their friend, but a friend that is supportive. A friend has access to information. A friend who would influence someone who is a decision maker. If you're this person is listening to what you want when it comes to your career. And they take action for you. Yeah, ya know, some people like that. They are cheering you on. They want you to win. Right? What is her name? Is it a Isa Ray Sakuma. I'm cheering for everybody. Black They are cheering for everything that you do from the time whether they cheer for you to make it safely to work, they cheer for you to get the first parking space to the closest to the front door. They're cheering for you to get the best hot meal out of the cafeteria to cheer for you to get the best seat next to the most influential person in meeting, they're cheering for you to get a management role they cheering for you to lead that team, they're cheering for you to get a promotion, they cheer for you to get that research here for you to be relocated to someplace you really want to live. Right? They are cheering for you in so many levels. And having an ally like that is ridiculous. Because you know what, even on your bad days, you know, you have that one person and and and even when you didn't get that promotion, you didn't get that race, right. You didn't get that free location for that assignment to a city where you really want to live. They still come over to you and they'll say to you You, it's okay. It is okay. Because it's not the end of the world. They will come over and simply say, You know what? We got to come up with a new plan, revise the strategy and make it happen. All is not lost. They stay faithful to what you want. They don't even they don't give up. Hey, Jeff. So that is what I want to talk tonight. talk to you about tonight for mentor Monday. So if you don't have an ally in the workplace, I suggest you go find one. I suggest that you get one in your life, because they are truly truly phenomenal to have going on with you. I that's all I have to say. That's all I have to say. So Oh, here comes a bye
Yeah, bye bye So, who has had an ally in the workplace, somebody who is helping you get to where you want to be someone who is helping you push forward in your corporate career, and somebody who really, really, really, really wants the best for you? Because that is truly important and truly key when it comes to your career. Thanks so much for the hearts. I really do. Appreciate it. All right, no questions. Guess what? It must be Yama Silva in Turkey. Y'all are quiet tonight. But I'm gonna get out of here. Um, catch me next Monday for another mentor Monday we will be talking about another person who is part of your career team. And that person is actually your sponsor? Yes. We're going to talk about your sponsor. why it's important to have one sometimes you may No, you have one. But it is definitely definitely important that you have a sponsor. So we talked about mentors. We've talked about allies. Now we're going to talk about sponsors, and then we'll finish up the year talking about creating your own community. Yes, and a support system for you. Aren't everybody, Michele Heyward I will catch you here next time. Have a great day. Bye