Wisdom Inspired
Aug 3 Ep 2240 Your Motivation is the Heartbeat of Your Actions
August 4, 2021 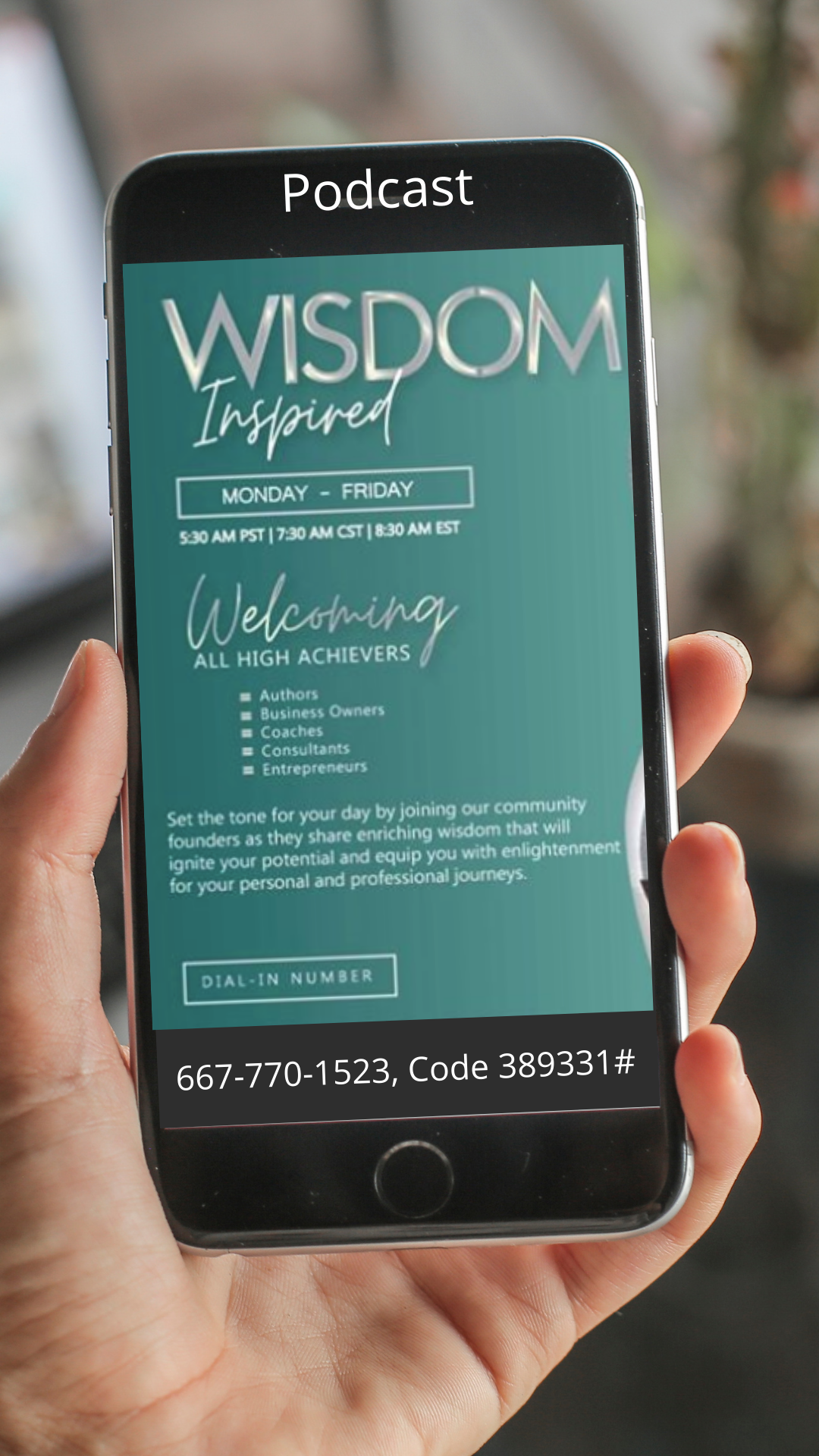 Coveting is defined as a yearning, desire or lust, to possess something. In this episode about covetousness vs calling we are challenged to examine the motivations of our hearts, it is the heartbeat of our actions. Scriptural Ref. John 6:12-15, 22-26, 35-40, 60-65, John 7:1 +++++++ Wisdom Inspired is a podcast designed to help High Achievers jump-start the day with the fuel needed to help propel you to keep moving forward. Wisdom Inspired is sponsored by the AAC coworking community. A Faith-Based VIRTUAL CoWorking & Collaboration Community for High Achieving female entrepreneurs, For more about our virtual coworking and collaborating community and how you can benefit from the resources and transformational coaching and community, send an email to hello@aaccoworking.com #WisdomInspired #WisdomInspiredPodcast #WisdomInspiredSuccessCall
Welcome to Wisdom inspired a podcast designed to help high achievers to eliminate burnout and overwhelmed. Now let's prepare to open our hearts, our minds, and our notebooks to receive. Today's with everyone's Tuesday is off to a great start. Um, I won't carry this morning. I'm gonna get right into today's top because I'm gonna read a few scriptures today and I want to make sure I have enough time to kind of bring y'all up to where my mind is.

Right? Well, I'm thinking today why I'm so excited to jump into this. So today's topic is your motivation is the heartbeat of your actions. Your motivation is the heartbeat of your actions. So yesterday I started a little bit, I challenged that's in an area about believer or a groupie, right? And you gotta go listen to reframe. I'm not gonna try to go all the way back to the internet, but it gave birth to today's topic as well. And we touched on a little bit that there are, you know when I was doing my research about groupies, there are two categories, There are the ones that they consider all the good groupies and that's there. They're there because they came to support the performer and then there are those that come to possess the performer and they're considered the bag groupies. All right. You got to go google it for yourself. It's so amazing to know that this stuff is out there. Anyway, that's another conversation for another day. Anyway, so, you got that part, right?

There are two categories of groupies. And then we talked about a believer and that believer is the person that understands their confidence is being placed in the leadership of the guidance of that, of the person with the authority. It's it's different. It's a different ability to show up. And as I studied that further And was in John Chapter six and over into John Chapter seven, which is some of the scriptures we're gonna read today. I saw a little bit better on the covid nous, that comes from a groupie, right? Groupie covets things, right? And so it made me go look at covetousness, right? And I wanted to see it because covetousness is a heartbeat to our motivation. We can be in our hearts, we can be motivated by covetousness or covet to covet, right? And were warned against that in scripture. So, to covet means to yearn to possess or to have something. It comes from the Latin word, cute, but cupidity, Right? It's C U P I D I T A S. Cupidity, I must say that, right? But it's sort of the root word for Cupid, right? It's C U P I D I T A S, which means desire, yearning, or least covetousness is the eager or excessive desire. So, Thursday is hot in the world. Did you find that in John Chapter 6? Well, let me show you. Okay, So in John Chapter six, we're gonna reverse is 12-15 1st. Mhm. And it reads when they had all had enough, he said to his disciples, gather up now the fragments, the broken pieces that are left over so that nothing may be lost and wasted. So accordingly they gathered them up And they still 12 small hand baskets with fragments left over by those who had eaten from the five barley loaves. When the people saw the signs, the miraculous, the miracle that Jesus had performed, they began saying, Surely and beyond a doubt, this is the prophet who is to come into the world. Then Jesus, knowing that they meant to come and seize him, that they might make him king withdrew again to the hillside by himself alone. Now, when I read this and I talked to our dream about this last week when I first got into John six and I was like mm, there's a key phrase Of words there in verse 15 it said that they came to seize him, that they might make him king. And as I was building on the groupie and building on those that come to possession, right? Because they had seen a fine he had performed for them.

They received his working a miracle and service to a need that they had. Their need was hunger, right? If you go back and read the beginning of Chapter six, Jesus already knows what was going on. And he perceived their need, their hunger right before they ain't even gathered. And so he in order to serve them right. He was not doing this out of his own desire. He was doing it to serve them. It was a part of his calling, right? Not his covetousness. However, because of their lack of understanding, their inability to receive. They fell into the thing of coveting him, right? Which is what a groupie does. The group, he begins to cover you if they covered you and they make you king. It is because of them that you are a celebrity is because of them that your career takes off. Because of them. You'll see it in award shows. They get out there and celebrate their fans. Because without their fans they wouldn't sell any records. That Yeah, you're right. They wouldn't make any movies. If it wasn't for the people going and paying for the tickets. They would not have existed if the people hadn't made them. I'm gonna make it a little more practical. We got a lot going on in the media right now about the Olympics. Olympics with some alright, they made them, they labeled her the female uh success story of the Olympics. They gave her that label. That's why they have the audacity to show up now and get mad because she decided to do something for herself.

Yeah, it's covetousness. That's what, that's what I saw here. So we clearly see that Jesus understood because he says he knew it, he knew it beforehand, that they desired to seize him and make him king. So that meant they wanted to put a label on him. They wanted to give him a platform, they wanted to be responsible for his success like groupies thing to do. But we continue to go further. I'm gonna skip over to versus 20-26 it says the next day the crowd that still remained standing on the other side of the sea realized that there had been only one small boat there and that Jesus had not gone into it with his disciples, but that his disciples had gone away by themselves. But now some other boats from Tiberias had come in near the place where they ate the bread after the Lord had given thanks. So the people finding that neither Jesus nor his disciples were there themselves, got into the small boats and came to Caponi um looking for Jesus, they look in the season, they look to make him king, they looking for the one that they're ready to put on the platform and it says in verse 25 when they found him on the other side of the lake, they said to him, Rabbi, when did you come here? They got the nerve to question him because he went away the same way that question in small vials because she decided I don't want to do this. And we're questioning her right to choose. So Jesus answered them. Don't remind you. His answers are so perfect. He doesn't even answer the question that they asked him. Okay, so here's the answer. Verse 26, Jesus answered them. I assure you most solemnly, I tell you you have been searching for me, not because you saw the miracles and signs, but because you were fed with the loads and were filled and satisfied. You want me to perform some magic tricks. That's basically what he's saying.

So how many of us are willing to follow our calling and be obedient to our timing? Or do we get in fall into the temptation of cussedness and make ourselves proud? We put on a show for people because that's what the business world tells us you're supposed to do, you gotta keep dancing for them to keep them in business with you, to keep them following you. But now you have gone so far away that you now get killed and destroyed because you're out of God's calling on your life, You've become covered over the things that you see versus following the calling, believing in the thing that you have your confidence in. So is your motivation? Is your motivation leading to a heart attack? Is it causing you to have heartbreak and to die sooner than your timing? Your motivation is the heartbeat of your actions? So we have to evaluate what's motivating us. Is it covetousness? Are we chasing after? Are we looking for God only to perform for us? Are we looking only for him to give us the blessings so we can show them off? Or are we really believers? And we are confident in our ability to do the things that we do not because of us but because of him through us. Because of his direction and because of his guidance, that is what we need to compare. Are we being motivated by covid Nous Are we being motivated by our calling?